Bloc Party have now released their 5th studio album ‘Hymns’, and I have to say if you were hoping it to be like the “old” Bloc Party then you were mistaken. Their classic indie rock from debut album ‘Silent Alarm’ has gone. Now they haven’t had the best of years since their album ‘Four’ in 2012 after long time band members’ bassist Gordon Moakes and drummer Matt Tong left the group (Moakes 2013 and Tong 2015). With Kele Okereke and Russell Lissack as the main songwriters, ‘Hymns’ is more of a breakup album to show the shift in dynamics.

Its strongest moments address the confusion and uncertainty that come after the dissolution of a relationship. Songs like “So Real” excel by holding back, with Okereke mature” chilly electronics popularised by the xx and that trip-hop. Album closer “Living Lux” finds Okereke sharing his moments with the former band mates “Don’t You remember how this began. You begged me for a chance” In the context of the band’s line-up shuffle, the song, along with others on the album, feels as much about Okereke saying goodbye to his former bandmates as it does old loves.

“The Love Within,” an indie disco-pop hybrid that is somehow both garish and bland, is comfortably the worst song on Hymns which trails a Silent Alarm throwback riff over low-key soul and hangover-soothing deep house; on “The Good News,” with its country slide guitars, is the weakest track on the record and also the least indicative of its sound as a whole.

My personal favourite is “Different Drugs,” for me it is the best song on the album and at just under five and a half minutes it is also one of the longest. The heart-warming beat and strong lyrics of the record may be the band’s best song in a decade. The song finds Okereke detailing the slow-moving train wreck that is the end of a relationship, comparing the separation between lovers drifting apart to the feeling of two people riding the effects of separate elements. The music builds to an oppressive outcome, and right at the climax, Okereke pulls back, using a ghostly pitch-shift to craft a refrain that feels very empty. It’s a masterful moment that shows how Bloc Party can succeed when embracing a more mature attitude.

Much of Hymns is simple, which is a huge change from the band’s more traditional indie rock sound, which hinged on vibrance and lots of energy. The one thing to applaud is Bloc Party’s willingness to change course and showcase a breadth of diversity on the new record. Themes of loss, grief, and finding meaning in one’s life are buried deep within the subtext of the record. It’s just a shame that after listening to Hymns, we’re no closer to finding any kind of revelation or spiritual bliss.

An Introduction to We Were Glue 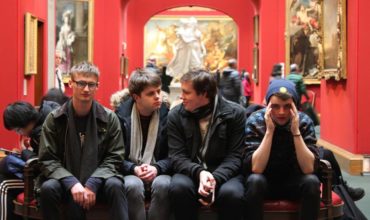 The Sherlocks @ The Talking Heads 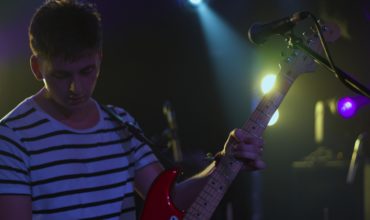 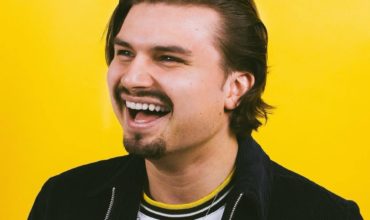